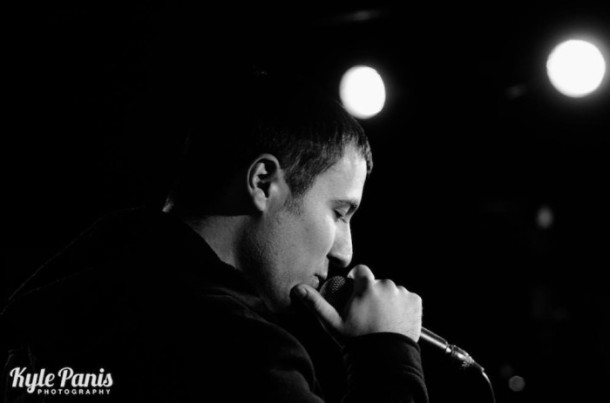 Splyt: Rise to the Top

Doing what we do and doing what he does, it was only a matter of time before our paths crossed. Twenty-two year old Chris Vigil a.k.a. Splyt is definitely a Colorado artist to look out for. He’s been opening up for some pretty big names, and after every performance few can deny that he walks away leaving a huge impression on everyone in attendance. Not only is he “doing it”, but he’s “doing it” the way it’s suppose to be done, and I’m sure he’s doing what plenty never imagined he could. His latest project REMADE has already gotten more than 500 downloads, which is a pretty big feat when you consider most artists on the rise will be lucky to hit 200. With that, it’s our privilege to introduce you to an artist with momentum…

How did you come up with your Moniker “Splyt”?

S: [laughs] I have to take you through the process. In high school, I was originally a “singer” (a bad one) and I would write rhymes on the side that a homie of mine would use for his rapped verses. This was before Drake really did his thing so when my first song was recorded I was asked what my name was for the credits.  I thought “singer that writes raps, that’s like a split personality of subject matter” so in the interest of being unique (and young) I decided to put a Y instead of the i, and that stuck. I soon realized I didn’t have the overwhelming talent for singing so I decided to stick with rapping and it’s starting to look like a great idea.

Do you remember what the first rap you ever wrote was about?

S: My first rap, damn this is definitely hard to think back to. I think I was 14 and I found an instrumental of Jadakiss’ ‘Why” track and wrote a remix. The first lines were like “why are some kids born rich/ why can’t my family ever seem to afford shit/”. [laughs] I thought I had it so hard…

Who in the music industry do you think you would vibe with the most, and why?

S: Artist-wise: I’d probably say Wale. His lyrics really resonate with me on a personal level and I feel he’s an artist that really reflects his personality in the music like myself (not to say that I’m on the same level as Wale at all, dude’s a straight-up genius).

Producer-wise: I’d say either Timbaland or Ryan Lewis. I think their wide range of versatility would be awesome for me to kind of run wild with. I don’t just write party bars, I write a lot of R&B tracks and deep shit as well that I’m feeling more and more comfortable with so I’d really like to have somebody that is willing to produce outside the box as well.

What was your first big show?

S: My first big show was opening for Hoodie Allen on his All-American tour-stop at Bluebird Theatre in Denver (May 3, 2012). It was sold out and packed by the time I was supposed to go on and my R&B singer/hype man bailed at the last second.

With skill just being one part of the equation, what else would you say has been a significant contribution to your growth/success?

S: The most significant contribution is by far the team I have with me. My manager Dan Hargrove and graphic designer Stryker have had such a huge impact on my career trajectory that I literally don’t even put anything on my résumé that happened before them cause that was practice.

Although I write and perform all of the music, they are truly a huge asset to the business and creative side of things. I can bounce ideas off of them, and if they don’t like it then I move on or make it better. It’s a bigger help than I can put into words for real.  It’s also a feeling of more confidence to push my own personal limitations that has also contributed heavily. When you’re comfortable with what you do then other will be comfortable receiving it.

On your latest project REMADE you have a song called “Teeter” with a miss Sunday Lane. What was the inspiration behind that song, and how did you initially hook up with Ms. Lane for the collaboration?

S: My inspiration for that track was actually a relationship of a friend’s that was very destructive but neither of them could bring themselves to leave the other. Sometimes there are just people meant to be together, and I think this track really depicts the tougher side of that “fairy tale”.

Dan actually grew up hanging out with Sunday’s sister. So when he jumped on as manager, one of his first suggestions was to get a collaboration with her and that was a golden idea. Sunday’s an insanely talented artist and such a great person.

Speaking of girls, you seem to have a lot of ladies rooting for you. Do you think they’ll have a big part in your success?

S: I think ladies have a huge part in the success of pretty much ALL things out there. I love the ladies of the Squad, they’re by far some of the biggest supporters of what we’re trying to do for Colorado.

When girls claim Squad then guys may just follow to stay with the same interests as them, you know? Every fan is important to me so I never value somebody over another.

But, being that I started really dedicating my life and drive to music after a failed relationship, it’s dope to have as strong of support as we have from the ladies. Kind of a “told you so” moment to my ex haha.

You’re opening up for Macklemore on April 20, how the hell does that feel?!

S: In one word: surreal!

When me and my team first linked up, I thought it would take 3-4 years to do a show with a major artist, let alone the biggest artist of right now. We got the news on Chrismas (before Home Stretch or Remade) so it only took us 7 months…truly amazed but not surprised considering the amount of work we all put in.

What is your goal with this whole music thing?

S: My goal is to keep getting better, make the best music I possibly can, give my team and family a comfortable life, make my home state proud and be respected for what I do.

I know not every single person will like what I make or do for a living, but as long as they respect me as a person the same way I respect others, that’s all I can ask for.

A selfish goal of mine, real quick, is to prove all those people that laughed at me when I first started, wrong. Nothing drives me more than that hate.

What do you think needs to happen next to get you to the next level?

S: I think I need to put out quality music videos. Which is something that we’re invested in at the moment. Our philosophy is to never do something until it’s gonna be done at 100%. We can shoot a video tonight but if it isn’t up to a standard that we laid out for our fans, then it’s nowhere near being worth it. Consistent improvement is our aim.

Are there any other Colorado rappers you listen to?

S: I listen to pretty much every Colorado rapper I can, like Lebron watches other NBA games, to keep track of the competition. I’m super competitive, I want to be the biggest artist in the world but to get there I have to hold down the state that I’m from and rep harder than anything else.

The artists I listen to regularly though are my homies D-Stylz and Pizzie, they keep me on my toes for sure. Shows with all three of us are going to absolutely crack in the future, can’t wait for that! Coming up though, my favorite Colorado rapper though is C-Notesche (who’s actually Stylz’ labelmate now). I still bump his tracks all the time shout out to C.

What’s your favorite song to perform and why?

S: I have to pick two, Settle Down and Youth.

Being that settle down has some fun back and forth with me and Stryker and it’s usually on the front end of the show, I don’t think a lot of people expect for it to be so fun.

Youth is always close to the end and seeing how many hands go up when we ask for the “ones up” kind of proves to me “yes, we came in as an opener and now this crowd is partying with us”. There’s no better feeling than to have nobody know who the hell you are 30 minutes ago, then be a huge fan now. It’s awesome.

When can we look forward to your next project?

S: End of 2013, I already have the name for it and the concepts, way more social issues to accompany the party tracks I love to do. The Home Stretch 2 will come out before the actual project so people will begin to expect the trend I hope. I started writing actually the night Remade came out so I’m ready to get back at it, after these shows of course.

Anything you want people reading this to know?

S: First and foremost a sincere thank you from the bottom of my heart for all the support of the work that I put in. It never feels like work cause I truly do love it but to see that what I love brings others so much joy and helps them get through something in their life, it’s such an awesome feeling.

This is why I try every way I can to connect with the fans, yeah I’m busy now but I’m never too busy to respond to anything I can.

You can stay connected to Splyt by liking his Facebook page HERE, and by following him on Twitter HERE.

Keep your eye on this guy and just… WATCH