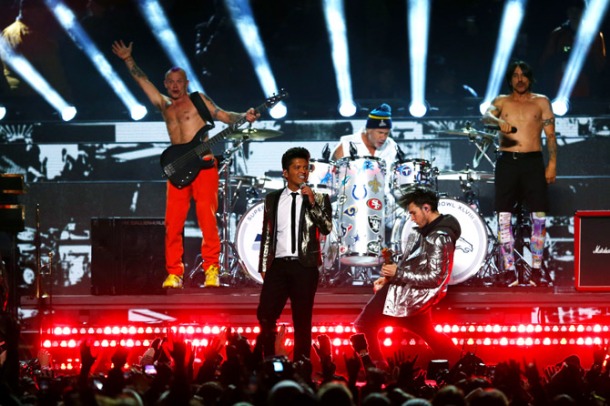 The mind numbing boredom of the Super Bowl is finally over (did Denver even show up?).  We can all go back to our extremely monotonous and boring lives consisting mostly of staring at our cellphones in public and being totally self-involved with shitty internet blogs and writing Super Bowl Halftime music reviews.

With this said, I am sure no one was staring at their cellphones during the “memorable” performance of Bruno Mars and Red Hot Chili Peppers during the Super Bowl halftime show.  For all the glitz and glam of the Halftime Show, there wasn’t a talented individual on stage; after the game, it was apparent the whole stadium was void of talent. Talk about hype…Talk about disappointment…

While I drunkenly stared at the blaring, gigantic TV during the Halftime show in some overfilled LoDo bar; it appeared at first midgets had taken the stage of the Halftime Super Bowl Show…Instantly, I was excited…”Midget Revolution? Midget Super Bowl?” I thought, drunkenly.

Once the lights were switched on and the silhouettes of the mini people were illuminated; my hopes were destroyed.  It wasn’t midgets after all.  Rather it was rosy cheeked children (the worst people in the world); one could sense a true disaster was unfolding right before our very eyes.

Soon Bruno Mars took the stage with his “unbelievable” drumming, covered in full regalia looking like a lesbian Elvis Presley or possibly a blacker Max Headroom.  Was it any coincidence that Pepsi was behind this debacle?? (Remember Max Headroom and Pepsi campaigns of the 80s??  I hated Max Headroom, he was super creepy, but I would have taken him & a Pepsi over Bruno Mars any day, especially on this very day).

Anyways, you got to give it to Bruno; she was one fine looking chick..(pause).  Besides ripping off every great artist of the past, literally from head to toe (moves of James Brown, clothes of The Temptations, garbage of every 90s alternative band) one hopes something, anything of interest would happen; especially with all that stealing of nostalgia and artists of the past thing going on. Unfortunately nothing exciting occurred; all we were left with was a mash up cluster fuck of every generic music genre known to man; what spewed forth was worse than anyone could imagine.  It was a weak attempt of every weak attempt in the history of weak attempts at a live performance. Amazingly, all of this mess was done within 10 minutes!  Quite impressive, but the horror wasn’t over yet…

Geriatric front man, Anthony Kieds, took the stage shirtless as usual Jumping off stage. I was scared, and not in a cool way – more of like the “dude, put your shirt on, you old fuck” kind of way. Soon, everyone was chattering about how good he looked for 50.  I was thinking, sure, but who wants to see a shirtless 50 year old man flop around on stage??? RHCP started kicking out the jams; actually the very same jams I remember from grammar school.  Who thought I would be doomed to listen to the same shitty music I did back when I was a wee young one?  Am I in hell?  Nietzsche was right about the Eternal Return!!! AH!

The Red Hot Chili Peppers sucked then, and with all the fame and exposure one would think that would change, that they would progress. Unfortunately, they still suck and have not progressed in any way possible.  The beanie wearing, 60 year old, arrested development, Will Ferrell looking drummer looked as if he would die at any minute.  Is this what “Rock” has come too?  Watching these old idiots jump around while acting and dressing the same they did 25 years ago???  Playing the very same boring songs they did 25 years ago??? Is this what people want??? Is this entertainment??  I ASK YOU WORLD; IS THIS WHAT YOU SEEK!?!

Tick or Flea or whatever he called himself looked about the same; maintaining his physique through years of drug use that preserved him like a well pickled egg.  Everything was sad and pathetic to me, but the fans looked like they were having fun (hopefully they were handsomely rewarded, because that is the only way I would be looking as they did).

Between the doo-wop dress and dance of 40 years ago and the same song from 20 some years ago everyone must have thought “how original”, “how unique”; rather than think “what a hot mess of outdated pop culture and nostalgia crap quickly slapped together”. Apparently, aging celebrities beyond their prime and ripping off dead artists of the past is all the rage within the music scene today.  This, of course, is due to the absolute void and absence of anything with artistic merit and the dominance and institution of the music industry and nostalgia as a manufactured art dominated by corporations who then feed us back “what is cool”.

In all honesty, I didn’t even watch the Halftime show at the bar on that fateful day of the Super Bowl; I just watched it on YouTube 20 minutes ago.  During the actual Halftime on Super Bowl Day, about thirty seconds in (after being disappointed about the midgets), I decided to go to the 7/11 to buy beer.  This is mostly due to the fact that I am a cheap ass and didn’t want to drop $5 at the overpriced and over packed bar with amateur drunks yelling constantly and incoherently.

In conclusion, can we please dispel of these semi-retarded, elderly performers beyond their shitty prime and “give it away, give it away” and start fresh with some young, up and coming talent?  By young and fresh talent, I do not mean nostalgic douche-bags nor talentless Max Headroom’s.  I, for one, am not holding my breath.  Everything sucks now and there is no turning back. However, I look to all of you – Go out and make it a better world. For the love of god, do something new and original…Please…Time is running out…