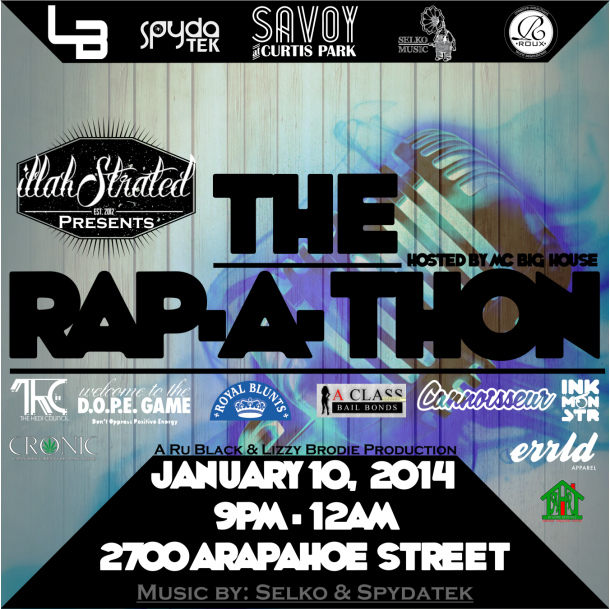 Infinite Rhymes: Inside the Rap-A-Thon

The culture in Denver is so thick, I don’t think a knife could slice through it. January 10th’s Rap-A-Thon was a hearty representation of the thriving MileHI Music scene. The Savoy was a delightful concoction of versatile flavor. A rather saucy crowd displayed the Denver fashion scene with much grace & dapper. Local brands Illah Strated, Errld Apparel, & the Hedi Counsel brought offerings of freshness. The first lady of Colorado, Mary Jane, was highly honored with Royal Blunts & Cannoisseur sharing their wealth. The air was fragranced by plumes of smoke & aromas of dabs. Deep Eddy Vodka coated the throats of happily inebriated patrons. Most importantly, ears were adorned & positively permeated with strong rhymes.

For three hours rapper after rapper dropped their piece. More impressive than the quantity was the quality of lyricism. Artists from all corners of the box came out to hard body the cypher. A few of our favorite crews came united and conquered. Special mention goes out to Urbane Society, Soul City Studios, Squizzy & Welcome to D.O.P.E Game. The array of artists who gripped the mic was so vast we just couldn’t cover everyone. The numerous artists I was itching to feature slipped anonymously away into the crowd. I will be throwing lassos & reeling you all in at the next Rap-A-Thon. For now, please know our collective ears were pleased with the lyrical presentations of the night. To those of you who didn’t attend the event, we’ve collected responses from all perspectives of the cypher. The scoop doesn’t come from the goodness of our hearts. Really, we mean to make you jealous about the psychedelic evening you missed. Below you’ll hear the takes of Ru Johnson & Lizzy Brodie who planned & produced the cypher, as well as commentary from the host MC Big House & three of the participants: Ill Seven, Rebel Minority, & Logistixx.

Q: What is your vision for the music scene in Colorado?

Lizzy: To continue to support & showcase the talent!

Q: How do you believe cyphers like the Rap-A-Thon impact both artists and audience?

Ru: To see such a big cypher positioned to focus only on the rhymes is quite incredible. Both the emcees & the audiences are always pleasantly surprised to find such a solid focus on the rhymes & the celebration of the emcee. Artists become inspired by their craft while audiences get to indulge in an onslaught of never ending rhymes. Win, win for all involved!

Lizzy: The Rap-A-Thon is special to me because of how positive the feedback is. The emcees get so excited & are grateful to have a platform to showcase
their skills, learn & create with so many other local talents. I think it brings something completely new to the artist & the community.

Q: If you could deliver one message about the creative culture in Colorado what would that message be?

Ru: The scene is thriving, independent & incredibly motivated & inspired by organic movements. Colorado is more than weed & mountains (though we love both), but a place where artists are tapping into the deepest parts of creativity & executing the vision with perfection.

Lizzy: That we are here, growing & learning! There are so many motivated & passionate people here; tapping into your creative skills is not hard to do! Come get inspired in Colorado!

Q: When can we expect another Rap-A-Thon?

Ru: The next Rap-A-Thon is yet to be announced however we will be competing to break the Guinness Book of World Records for marathon rap time. We outchea.

Lizzy: Yes! I don’t think the people would let us stop this event. We are looking to break records next time! The Rap-A-Thon will only get bigger &
better from here.

Q: In your opinion what is the ideal outcome of a cypher?

Big House: The ideal outcome of any cypher is to evaluate the elite vs the average; the emcee vs the rapper; the skilled vs those who think they have the ability! All of that while allowing by standers to become fans of what they find interesting in each participant. However, some may leave with fewer fans.

Q: What are your tips for commanding a crowd?

Big House: Commanding a crowd involves skill first, you can’t control a crowd if you first can not control a microphone! Know your craft! Have a commanding voice, speak with authority, be original, be intellectual, be above average. Many people are involved for many reasons, be able to cover as many bases as you can in the length of time provided.

Q: Do you consider it cheating if a rapper isn’t free-styling?

Big House: In this day & age you can’t expect someone to completely freestyle in a cypher, unless it’s classified as a freestyle session. A lot of people these days choose the pen game over the freestyle game. Many rhymes are premeditated in a cypher. Basicially, people bring their cheat sheet, but the class can now use their notes on the tests.

Q: What do you envision for the music scene in Colorado?

Big House: I vision for the music scene to be put on an international spotlight,and allow our scene to be respected for the talent within these walls. I believe that recognition is achieved by creating undeniable music; above standard business practices, & ultimately uniting the community to stand strong for the arts produced here!

Ill: All my rhymes except for one verse were freestyle; I think the art of freestyle is important because it forces an artist to work that brain without over analyzing. Free-styling gives you the true spirit of an artist, not one that is premeditated.

Ill: My movement. I’m an Artivist, meaning an artist that’s an activist. I do workshops in middle & high schools, as well as colleges. We discuss dealing with social problems & come up with social solutions. I think it’s easy to focus on money. I choose to use my art to provoke & motivate change. I believe revolution is dead & the next step is for the people. For us to step into evolution, the progression of the mind. There’s not only black and white issues, but people issues. Issues ranging from misogyny to the haves vs the have nots.

Ill: I’d like to see the music scene step out of the boxes & limitations that the commercial main stream puts on us. As for my career, I want to see myself grow into a voice of the people & use my art as the vehicle.

Rebel: I was, I like to challenge myself & feed off of the energy in the moment. I think that ability does enhance your arsenal & showcases lyrical ability & flow away from writing. Ultimately though, free-styling is fun for an artist.

Rebel: At the event it was all about love & having fun. I think my lyrical content sets me apart, I choose to talk about different topics & address them in a unique way. I make music that is a reflection of me not what the industry demands. I also feel my style & flow stands out, you’ll never mistake me for another Colorado rapper.

Rebel: I would like to see this “Artistic Renaissance,” continue to grow. The amount of quality art coming from not only the music culture but all mediums is booming right now. From my own career I want to the see my new project “Colorful Abyss,” dropping next month do exceptionally well. I want more people to hear my music locally & nationally.

Logistixx: I was both free-styling & spitting verses. I went up four lengthy times. I approached the first two times as a warm up with some verses & the last two I mainly free-styled.

Logistixx: I believe that my confidence differentiates me from other rappers. But there are always new ways I will discover which differentiate me.

Logistixx: I would like to see more dope rappers get out there & form more connections with other rappers. As far as my career for 2014, it comes down to me & how I go about my come up since I’m my own competition.

Before we part ways we have one friendly word of advice. All of the individuals we interviewed have bequethed you emcees to please familiarize yourselves with the proper form of a microphone checker. As a rapper the mic is your instrument, your tool, an extension of your message. Kind of like a wizard’s wand each microphone is different but here a few tips that will have you well on your way to conjuring magic with the mic.

Placement: Most microphones will pick up sound best at a distance of four-six inches from your mouthpiece.

Angle: Position the microphone at a horizontal angle. The horizontal position ensures that sound is shot directly into the resonator.

Grip: Do not smother the grill of the mic. Wrap your hand firmly around the stem & let that mic know you are not playing.

Movement: Wherever your head goes, the microphone follows. Think of the microphone like the red dot of a sniper rifle. No matter where the target sways, that dot is always aimed at it.

We’ve listed links that will direct you to the lovely individuals interviewed above & their content:

A love for music was cultivated in me from conception. That love has harvested an obsession, an addiction that I just can't quit. From the moment I could hold a pen, I can remember writing songs with my dad; composing melodies with him and brainstorming ideas. I would wake up late at night, and he'd be in the living room writing, singing, and altering his clothes to fit his individuality. Like most children, I remember wanting to be like him, and wanting to create something that would make him proud. Creation was our connection, especially through music. Since then, music and its cousin poetry have been my means of connecting with the world and conveying my beliefs. Music has and always will be my motivator, my comforter, my hype-man, my confidant, my psychologist, my professor, the one that truly understands me. I'm not selfish though, I want to share music with the world. I understand that music can embody everything, for everybody. Music is one of the universal constants that crosses all boundaries. So let's get connected.
7 years ago in Local Music News
A-DulaCannoisseurcoloradocypherdenverErrld ApparelIll SevenIllah StratedLizzy BrodieLogistixxsmarijuanaMcbig HouseMile Highmilehimusic.commusicRap-A-ThonRebel MinorityRoyal BluntsRu JohnsonSoul City StudiosT.A.U.The Hedi CouncilThe Savoy at Curtis ParkUrbane SocietyWelcome To The Dope Game
0 Comments
Inline Feedbacks
View all comments
1 Step 1
keyboard_arrow_leftPrevious
Nextkeyboard_arrow_right
Featured Music Festivals
Stay Connected!
Upcoming Music Festivals
Our Columns
wpDiscuz
1 Step 1
keyboard_arrow_leftPrevious
Nextkeyboard_arrow_right
×