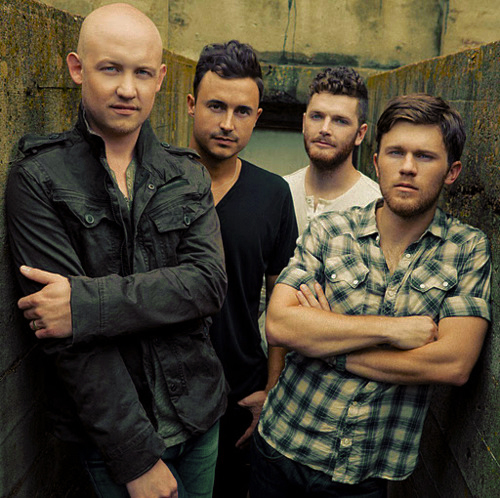 It’s been a whirlwind couple of years for The Fray, the Denver-based quartet whose earnest and melodic songs have been striking a huge chord with audiences. Formed in 2002 by Isaac Slade (vocals, piano) and Joe King (guitar, vocals), The Fray owe all of their early success to their organic, grassroots beginnings. In other words, they did it the old fashioned way: they earned it. It’s a story you don’t hear much anymore these days: local area gigs led to enthusiastic local press and local radio support.

Joe and Isaac were former schoolmates who bumped into each other unexpectedly, and – one thing led to another – they started writing songs together. The songs were catchy enough to attract two of Slade’s former bandmates – drummer Ben Wysocki and guitarist Dave Welsh – who soon joined, completing the band’s lineup.

The Fray garnered an early following through impressive area gigs and the support of local radio, which led to a listener-driven campaign to get the band a record contract. With strong word-of-mouth, the band won “Best New Band” honors from Denver’s Westword magazine and got substantial airplay on two of Denver’s top rock stations – the demo version of “Over My Head (Cable Car)” became KTCL’s top 30 most played song of 2004 in just 4 months. And the listener campaign worked: the band signed to Epic Records in 2004. Fittingly, instead of closing the deal in an office or hotel room, they signed on the dotted line onstage at the Fox Theatre in Boulder, Colorado.

The group’s organic rise to fame is key to their long range plans: “I think it’s vital to the longevity of a band,” Joe King says. “Of course Denver is where it all started, but word spread across the country via the internet even before radio stations were playing us. I remember on our first headlining tour, we would play cities where we weren’t on the radio at all, and the venue would be full of people singing our lyrics.” He adds, “Some people think we came out of nowhere quickly, but we had been working hard for four years before the mainstream public had heard about us.”

Dave Welsh adds, “The grassroots is where music lives and breathes, where it finds its energy and its passion. Music can still exist when it becomes mainstream, but only if it has firm roots with the fans at home. I think you become a musician at home, and simply refine that skill on the road as a touring, major label band.”

The first single from How To Save A Life, “Over My Head (Cable Car)” climbed into the top 10 on the Billboard singles chart, has been certified platinum, and was streamed more than a million times on MySpace in just one month. Indeed, MySpace has been good the to the band: they’ve been streamed over 16 million times, they have had more than 5 million views and close to 300,000 friends on the networking site. The Fray doesn’t fit easily into any niche, and they don’t need to: word of mouth (or, word of digital mouth) has been good enough. The songs stand on their own, no clever marketing or catering to genres necessary.

“Over My Head (Cable Car)” was inspired by Isaac Slade’s temporary estrangement from his brother: “It is about a fight I got in with my brother, Caleb. After he graduated high school, we drifted apart and really hadn’t spoken in a long time. One day we both realized that we needed to fight it out. We’d been friends for twenty years. That’s a long time when you’re only 23 years old. We fought it out, and he’s one of my best friends today.”

The title track, “How To Save A Life,” was inspired by Slade’s experience as a mentor to a crack addicted teen. “I was a sheltered suburban kid when I met this guy. He was a recovering addict, coming out of a really tough teenage life. Thankfully, he was on his way out of that life, so he was able to really look back with some objectivity. The song is more of a memoir about his slow motion descent and all the relationships he lost along the way.” Destined to be one of the band’s greatest hits, Slade isn’t worried about getting tired of performing the song: “It is the easiest one for me to sing every night. I constantly get emails from people who relate to it.”

The song has resonated with fans in some truly moving ways, which is humbling to the author: “Some people actually formed a non-profit organization called Save A Life. They lost their son to a tragic car accident and apparently ‘How To Save A Life’ was the last song he downloaded. Another girl lost her mother to suicide. She wrote me and said it helped her deal with her mom’s death.”

The band recently saw footage of two high school kids performing the song at a talent show, which was somewhat mindblowing for Joe King, and provided him with something of a “full circle” moment. “Something so simple as two high school students playing our song at a talent show doesn’t seem like it would be a huge moment, but it was. I’m proud of it because I relate to it so closely. That was me eight years ago, learning my favorite songs, from my favorite artists, and playing the songs that moved me. It just hit me that someone was now doing the exact same thing as I was but with my music.” It was a “full circle” moment for his bandmates as well: Slade and Wysocki first performed together at talent show years ago.

It turns out that The Fray’s music has resonated with lots of people: they are one of the most licensed bands of 2006, with their music being featured on Scrubs, Grey’s Anatomy, What About Brian, NCIS, One Tree Hill and Bones as well as in HBO’s summer promos. Joe King: “I would say my favorite so far would be the recent HBO spot and the Grey’s Anatomy spot, both using ‘How To Save A Life.’ I remember last year seeing the Aqualung HBO spot and was shocked and almost jealous by how good it was. I called our managers and asked if we could get a spot like that, and I remember him saying, ‘That’s a tough one.’ When I watched our HBO spot I didn’t move, I don’t even remember breathing because I had the chills.”

As a result of all of this, How To Save A Life is quickly approaching platinum status, and the band has gone from playing small club gigs and opening slots to headlining larger venues, including a “hometown” gig at legendary Denver venue Red Rocks, which was famously host to U2 (two tracks of their classic live EP Under A Blood Red Sky was recorded there; Incubus and Dave Matthews Band are among the other artists to release live recording from the fabled venue). Ben Wysocki comments, “When you’re the opener, you have 30 minutes, maybe 45, to prove yourself… and in a way, it is hard to settle in. When you’re headlining, you can take a little more ownership of the crowd, they’re yours for an hour and a half or so and you gotta treat them right, take care of them, be responsible with them, do the best you can to entertain them. There is pressure either way, but definitely more satisfaction in a headlining show.” With songs this strong, The Fray should get used to headlining.

If you haven’t caught their shows yet, you can get a taste on their recently released iTunes exclusive live “bootleg,” Live At The Electric Factory,” released July 18, 2006 (iTunes has also been good to The Fray: their album has been in the iTunes top 10 for six months straight, a feat not accomplished by many other acts). Of course, the live release is something of a tease: once you hear it, you’ll no doubt want to catch them in person. Wysocki offers their plans for the rest of 2006: “We’re taking August off. Then, we’re going to travel the globe in September, tour the U.S. again later in the fall, play some random radio shows in December.”

And in 2007, The Fray returned overseas early in the year, heading to Australia (where “Over My Head (Cable Car)” has just hit #1 on the national radio charts), New Zealand, Japan and Germany for the first time. They embarked on a huge US summer tour and then hit the studio to work on the follow-up to How To Save A Life, a great first chapter in the band’s career. But, to be sure, it is the first chapter in the story of a band that promises to be around for a long, long time.