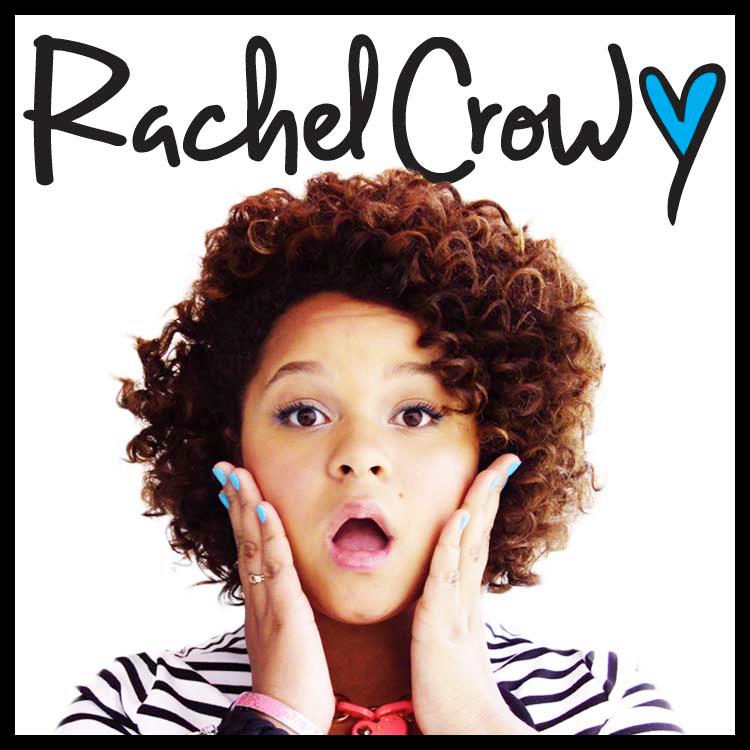 Every little girl has a dream, but some simply dream bigger; Rachel Crow is one of those girls. With her beaming smile, curly top and riveting voice, Rachel came from a tiny town in Colorado, determined to become a star and inspire the world.

At age thirteen, Crow packed her bags and set off to Los Angeles with her family. She wowed Hollywood, and the rest of America, the minute she opened her mouth at an audition for The X Factor. Her powerful voice echoed the soul of a past generation, and her spunky, sweet and sassy personality endeared even the most jaded heart.

When asked by Simon Cowell what she would do with the 5 million dollars, Crow began to explain how her extended family lived in a modest two-bedroom house and it was getting a bit crowded. Laughter erupted, and even Simon chuckled when she added, “And I’m a girl. I need my own bathroom!”

As a contestant on the first season of The X Factor, this five-foot wonder was hands-down an unequivocal choice of all four judges. The response from viewers was equally irrepressible.

Each week, she brought the audience to their feet with stunning renditions of songs like “If I Were a Boy” by Beyoncé and “Mercy” by Duffy. Jaws dropped for miles when she belted Etta James’s “I’d Rather Go Blind” and turned the Backstreet Boys’ “I Want It That Way” into a lovely ballad. Crow was a top finalist in the competition and soon signed a record deal with Columbia Records/Syco.

Crow stepped into the studio this spring to record her first EP. The self-titled debut showcases new music like the powerful “What a Song Can Do.” She imagines it visually with “a huge field of flowers and people singing and dancing with me,” she says. “I think it’s gonna move people.”

“Mean Girls,” the first single, co-written and produced by Toby Gad (Beyoncé, Alicia Keys, Fergie), speaks to all those kids who have been bullied. She reminds the bullies with a resilient voice that this girl won’t be broken. “Gonna just comb you out of my curls,” she sings on this bittersweet anthem.

Crow pulls from some tough experiences of her own for “Mean Girls.” “School was hard for me,” she says, “because I lived in a small farm town and I was so out of the box that I didn’t feel like the other kids really understood me…I really want to not only inspire kids who have been bullied, but I also hope to inspire the kids that do the bullying to stop that behavior.”

Raised on a farm surrounded by country music, Crow began singing as a toddler. She sang her first song, “Breathe” by Faith Hill at just 18 months. She later went on to enter talent contests at local fairs and decided by the wee age of five that she would be a performer.

Some musical influences peek out in her style. “I really love Etta James,” Crow says, “she is a rare talent, and I love, love, love Bruno Mars.” Speaking about her other favorites, Beyoncé and Adele, she declares, “they are amazing…I want to be able to surprise people like that.”

The Crow family is a tight unit with strong values that were evidently passed on to their children. “My parents,” Crow says, “have taught me to stay true to myself and to accept everyone for who they are. They work hard to keep me humble and grounded. I love my parents and my little sister, Hannah, more than anything in the world.”

Having been adopted at a young age by her parents, Barbara and Kelly Crow, her experiences and good fortune have inspired her to want to help others. “I want to start a foundation for foster kids,” says Crow. “I want them to have somewhere they can go for support. They should know that what they want to do with their life is important and to have someone there who believes in them.”

Crow has also begun acting on Nickelodeon’s comedy series, FRED: THE SHOW. She plays the recurring role of Starr, an eccentric student whose confidence slightly clouds her self-perception.

This foray precedes her overall talent deal with the network, and she is thrilled about the upcoming project. “I grew up watching Nick, and I’m a huge fan,” says Crow. “I really want it to be something that boys and girls like. I want them to dance and sing and have a ball.”

Crow was over the moon when asked to sing the national anthem at the White House to kick off the 2012 Easter Egg Roll. She spent hours waiting to meet the President during his election campaign, but never got the chance. Now, just 4 short years later, to be singing in between the President and the First Lady was absolutely surreal.

And she will continue performing live as she joins label mates Big Time Rush this summer for her first tour.

As her new career is blossoming, this young talent is proving that an ambitious goal is not impossible. Girls and boys alike can be inspired by the results of her drive and hard work. Dreams are now Rachel Crow’s reality.