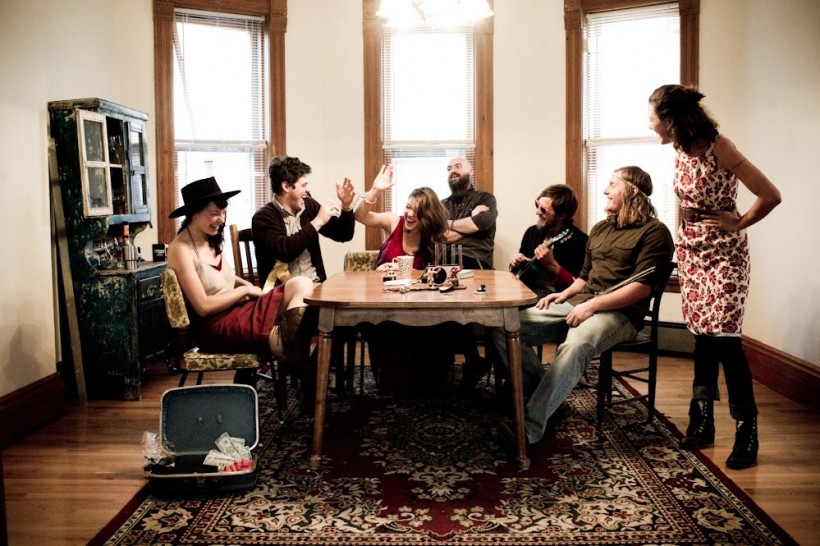 Since the band’s formation over 5 years ago, Paper Bird has been playing it’s joyful blend of folk, roots, and americana to delighted audiences across the country. Their unique sound is a combination of a dynamic and energetic rhythm section intertwined with effortless and ﬂowing harmonies. The group’s backbone is their songwriting, musicianship and general allergy to all limitations and trends. With seven members and no leader, the possibilities are ever unfolding, with ﬂuctuations in style and mood akin to weather patterns. A household name across Colorado, Paper Bird continues to tour and develop it’s voice and presence across the country. With 3 full length albums and several national tours under their belt, Paper Bird has steadily grown in both their success and sound while continuing to expand and explore what the band can do musically.

The seven members of the band include: Mark Anderson (drums), Sarah Anderson (voice, trumpet), Paul DeHaven (guitar), Esme Patterson (voice), Genevieve Patterson (voice), Caleb Summeril (banjo, guitar), and Macon Terry (bass). Each individual writes songs for the group and this keeps new material rolling of the shelf at a healthy pace. Paper Bird’s live performances showcase the diversity and good-time vibe of the group while providing a fresh and unique take on a sound that has a tendency to bring the listener back to a different era. Young in age but timeless in spirit, Paper Bird continually captures the hearts of new listeners and long-time fans. Their rare and beautiful approach to music led them to be featured on NPR’s All Things Considered and were voted in the Top 10 Best Underground Bands by the Denver Post three years in a row, as well as being 5280’s Top of the Town 2009 “Top Local Band”.

Paper Bird has released two studio albums, Anything Nameless and Joymaking (2007) and When the River took Flight (2010), and also a live album, Carry On (2011), which was the score to a collaboration with Ballet Nouveau Colorado of the same name. 2012 has the band on the road once again while releasing Carry On remixed and remaster on vinyl in the Fall. A new studio album is being written and recorded and is set to be released in early 2013.