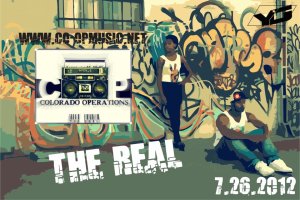 You can always recognize passionate people. Particularly when you have the opportunity to witness them working within their passion. They are the individuals others are magnetically drawn to. They illuminate rooms with their energy. They walk around with a purpose and a confidence, and everyone wonders; how can I get that? They are the ones with that elusive “it” factor. Spend one moment with the duo Colorado Operations, and their passion will excite you, warm you, and wow you.

Victoria and Napolean Price have an easy interation. Anyone can recognize their comfortability with each other, in conversation or in performance. There is no rivalry, rather they move fluidly as a unit. When their chanting out lines together, there is a cohesion that groups work for years to build. Perhaps, that is because they’ve had literally a lifetime to cultivate it. Not only are the two Buffalo, New York natives group mates, they are siblings. Family first is the motto with Co-Op. Music is their passion, but their relationship as brother and sister is their priority. If music were to ever compromise that relationship, family would win out-hands down. Somehow though, I don’t think that is an obstacle they will ever have to face. Although the pair admits their strong wills cause heads to occassionally butt; mutual respect and a deep-rooted musical connection always realign them. When they grace the stage there is no discord, it is their harmony that shines through.

Victoria a.k.a Queen V a.k.a Rebel Queen possesses such a strong presence. Queen V is a down to earth concoction of humor, intelligence, individuality, style, and grace. All of those elements transcend to the stage when she steps on, along with an undeniable ferocity. She has the fierceness of a hungry artist and the composure of a seasoned performer. The Rebel Queen is blatantly unique, but if I had to draw any comparison it would be to Lauryn Hill. Pause for a moment and let that sink in. Lauryn is arguably the most raw female MC to ever hold a microphone. Rarely does an artist come along with her kind of precision, articulation, and delivery. However, Victoria Price exhibits all those qualities in potent levels.

There is a sweet humility yet mischeviously confident air to Napolean or “Po” as he is sometimes called. On and off the stage he exudes a playful yet refined demeanor. Lyrically he is energetic and witty, and contributes a charismatic electricity to Colorado Operations’ music. As he recites his verses there is a contagious vibrance he spreads to the audience. I c0uldn’t resist getting on my feet and shouting out to their Colorado anthem “C-O” along with him, just to share in a bit of that hype. That ability is what seperates average rappers from exceptional ones. Napolean’s relatability and infectious energy, defines him as an exceptional artist.

Colorado Operations has a charming quality about them. They’re so laid-back, anyone could leave a conversation with the two feeling like you’ve known them for years. Musically, they’re so passionate you can’t help but to respect, appreciate, and endorse what their doing. Of course, that determined grind is driving them into several other endeavors. You can expect a future collaboration with local fashion designers; that will emblazon t-shirts with various Colorado Operations’ logos (they’re looking dope).  On July 26th,Co-Op is set to have a mixtape release party for “The Real”  at the Hi-Dive in Denver. Be there. I guarantee you’ll leave with Colorado Operations on your brain, and their mixtape in your CD player. In the meantime, check them out on Facebook: Co-Op (Colorado Operations), and get a sample of some of their music at:  http://callmequeen.bandcamp.com/album/the-real