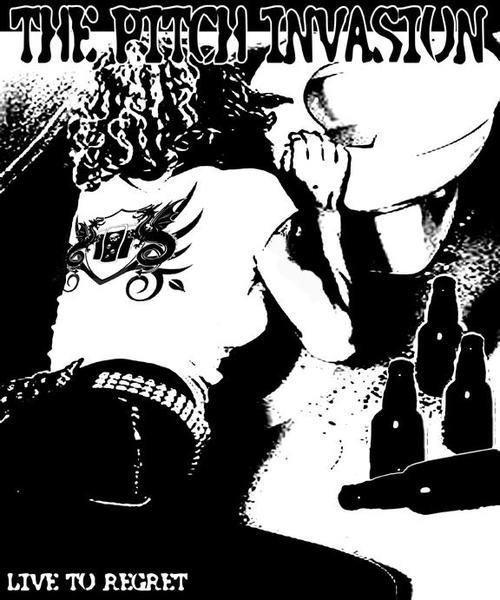 On a drunken Saturday night on the verge of urinating my pants (the typical Saturday night for me); a friend and I randomly wandered into that dark dank basement called the Meadowlark. As we drunkenly stumbled down the stairs, there was a sound becoming more and more apparent. “Is that punk rock music?” I thought in my inebriated brain. I started to get an erection. My heart started to beat fast. Was I hallucinating? I thought Denver was just a bunch of hippie pussies that like “the dead”. As I finally got into the venue, it was in fact “punk rock music” and, surprisingly, quite good! As the total docile tools that make up most of Denver peered through their vintage glasses upon the band, I took this as a sign to start an old fashion “mosh pit” at age 30. I think I punched some random vintage t shirt wearing guy in the face and it was all downhill from there…

Now wait!!! This was a band that was just antagonizing me to do so!! It is not my fault and I am unwilling to accept any responsibility for my terrible behavior. IT WAS THEIR FAULT! They just rocked that good!! The “mosh pit” I started consisted solely of me throwing myself around and almost vomiting while ruining everyone’s night and acting like a total asshole. I think my friend left in embarrassment, which is understandable. At one point I stole someone’s drink and attempted to make out with random chicks that walked by in disgust. When that failed, I went after the fellas. They weren’t havin’ that!!

Surprisingly I was not kicked out and the band raged on as I flopped around like a 30 year old bald idiot. No surprises there. As the night persisted, the music got better and better, faster and faster. Ironically, as this occurred, my behavior paralleled this; but instead of getting better and better, I was getting drunker and drunker and therefore more and more retarded. I am thinking of writing the meadowlark stating my confusion to why I was not kicked out and also why they shouldn’t allow drunk idiots, such as myself, to randomly start mosh pits. It would read as such:

As a frequent visitor of your fine establishment, I was quite shocked last night during the local musical group performance of The Pitch Invasion (terrible name). My shock consists of both disgust and disdain for there was a balding belligerent gentleman that was acting quite rude and harassing the customers. It seemed he was flicking everyone off and constantly hand gesturing putting male genitals in his mouth. In and out! This homo-eroticism was both tantalizing and disgusting. He was clearly acting like an infant. In the future, I would hope that Meadowlark would be more thorough in weeding out these bad seeds. They ruin everyone’s night and are just immature attention seekers. I could understand this happening at Matchbox, but from you Meadowlark?! I would expect more. Please be more diligent in allowing these assholes in. They just end up shitting all over everyone’s night. I did not get laid and I think it was because of this guy.

Anyways, I had a great time, so I guess fuck everyone else? I don’t know. I do know that The Pitch Invasion has a rough & gruff sound. There lyrics are fun and identify local cultural events that occur in and around Denver (such as picking up prostitutes around Colfax as stipulated in the track “3 Fingers of Fun”). They do have a bit of a DRI sound, but slightly heavier, which is great. The Pitch Invasion has a lot more of a punk sound than crossover thrash sound also. All the dudes seem to be older, so they know how to rock and party unlike the disappointing youth today who are always whining, docile, and use way too much hand sanitizer in public. Apparently the band plays quite often around Denver. Below is a listing, I hope to see you at their shows. I most likely will be putting my dick in your drink and trying to unsuccessfully make out with your girlfriends…XOXO

Here are a list of live shows and some songs that are good!

Jonathon is currently a misanthropic elitist who recently moved out of his parent’s basement at age 30 (Yay)… He is balding with ferocious speed and has gained 10 pounds in the last 10 days due to “emotional eating”. Among other great god given talents; he is a self-appointed expert on music, literature, art, social/cultural/political commentary, and film. Some nice people at Mile Hi Music caught wind of his lies and graciously/shockingly selected him to write some articles for them. Jonathon hopes his writing will give him the appearance of being “deep” in aims of getting young, artsy, indie chicks to make-out with him at bars while he pompously blabs on and on about how he is a “true journalist” and why everyone should really care about his opinions. Jonathon finds writing about things a bit difficult because most music/art/literature/culture/film is complete garbage… However, he is up for the challenge and is thankful for the opportunity! Jonathon will most likely be intoxicated while writing his articles. You will notice most of his articles reek of self-importance and lack any real substance, direction, or context. He also drinks for other emotional/personal reasons he would rather not get into right now. Jonathon apologizes for his maudlin behavior and, much like his sex life, the general dissatisfaction you will all experience after reading his “work”.Enjoy! Follow him on twitter.com, he rarely uses it because he hates it… https://twitter.com/JonathonRW For terrible reviews on classic literature, please visit him here: https://www.goodreads.com/user/show/3079518-jonathon
6 years ago in Fundamental Thoughts