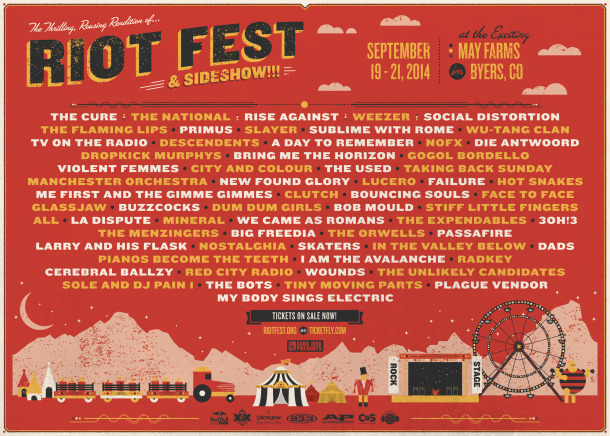 On May 13, 2014, the organizers of Riot Fest announced their 2014 lineup set to take place in three separate cities this September: Toronto, Chicago, and Denver. With this being their 10 year anniversary, they had to do it big. By big we mean having Pussy Riot, and Wu-Tang Clan a part of the festivities! As for Colorado, this will be our second coming of Riot Fest. Hopefully the weather will be more favorable this time around (bring a raincoat!).

Our friends over at Soda Jerks Presents have partnered with Riot fest, so be on the lookout for some giveaways in the near future. Last but not least, two of Colorado’s own; My Body Sings Electric & 3OH!3 will be gracing the stage this year as well. You definitely don’t want to miss this one! Purchase your tickets HERE

MileHImusic.com is Colorado's premier site for all things music. Our mission is to bring recognition to local artists, and also serve as a medium to connect Colorado to the hottest artists across the nation. To accomplish this we present one-on-one interviews, artist & song reviews, featured downloads, a concert calendar( AEG Live & Live Nation), music showcases, as well as concert ticket giveaways.
6 years ago in Local Music News
Riot Fest Denver