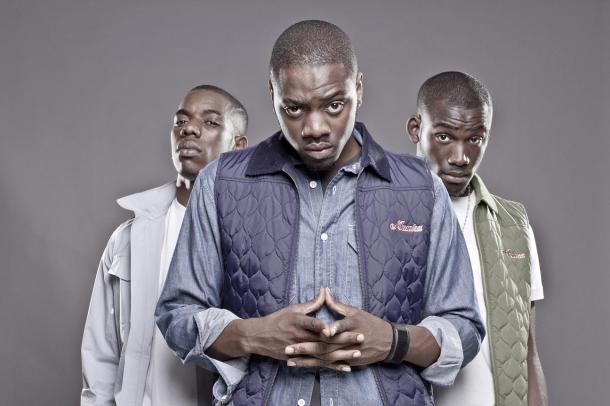 Since the release of their “The GREATNESS EP” almost two month ago, I have been bothering Marvell’s manager for an interview with the UK rap trio. Shocka, Double S and Vertex give their insight on whether the deficit of equality in UK and American Hip Hop will ever change, what they have been up to in the studio recently and who they think are the best up-and-coming artists in the UK right now.

Lee: For those reading, who may not know of Marvell and your music, give us a
brief introduction to yourselves…

Marvell: We go by the name of Marvell short for marvelous. It consists of Double S,
Shocka, Vertex and the DJ Limit. We are the voice of the voiceless, we speak for
the young generation – our message is for the young generation/youth to strive
for greatness and to know themselves inside out. We try to contribute to the
development process of them becoming better human beings. That is Marvell in a
nut shell.

The recent mixtape, Greatness, seemed the most serious and polished tape
both thematically and in the production compared to the Marvell Mondays and
Marvell FM series, was this is conscious decision?

Marvell:  The recent debut E.P. is more polished and I am glad you noticed that because
that was a conscious decision by us all to step it up. We’ve been away for a while,
our supporters have grown up, some even have kids and are facing real life
situations and so we wanted our music to reflect that the direction we are taking
is a bit different, but it still ties into what we’re all about, which is teaching the
youth to reach for the stars and achieve great thing in life so it all works out well.

I first heard of you when you supported Chipmunk on his tour in 2010, now he
has been signed to Grand Hustle and making waves in the states, do Marvell have
any plans to follow in Chips footsteps?

Marvell: We would love to go to America and follow in the footsteps of our good friend
Chip [formerly Chipmunk] but I think it’s important that we crack the UK first,
because this [our] country is in need of black Urban group. There hasn’t been
one like us before and it would be a good image for the kids to see – it would give
them hope that people who came from their areas [Tottenham] just like them
can go that far in this country, music wise. After that is accomplished we would
then like to be on the next flight to America, Young Money holler at us *cough
cough* (Laughs).

In the song “Marvell Music” theres a bar which says “Stepped in the scene, the
lights turned green”, however to me it feels as though the lights have been on
amber for a few years now. Has the fact you’ve been on the brink of mainstream
success for so long without fully making it frustrate you?

Marvell: I think God’s time is the best time. Another thing is that we are bless we
haven’t blown yet, it has given us time to study and find out what we want
to achieve and what kind of contribution we want to make. It is safe to say
that we’re ready now, oh and we would be lying if we never said we don’t get
frustrated at times (Laughs) but we know our time is coming so we’re all right.

There have been a couple of tweets informing followers that you’re in the
studio, so what is coming next? An album, a mixtape, an EP? Can we get the name
of any songs you’ve created?

With a number of lists being released in the last month from MTV’s “Hottest In
The Game” and XXL’s “Freshmen” could Marvell name a Top 5 UK artists to look
out for?

Do you think there will ever be a time when UK rappers will be regarded as
talented as the likes of Jay-Z, Nas, Eminem etc. from America?

Marvell:  That time is coming, who would have thought that Chip[munk] would be
signed to T.I.’s label or Tinie Tempah would go platinum there in America. I think
as long as we keep dreaming big it’s possible the next few years – watch what
happens.

If you could collaborate with any artist in the world, who would it be and why?

So we officially have a debut album on the way from the Marvell boys, but first head to www.marvellmusic.co.uk and download “The GREATNESS EP“.

“GREATNESS is upon you, you better act like it.”

Hello. I'm Lee; a nineteen year old with a dream of conquering the music industry in any and every way possible. Started out blogging as a hobby, now I'm becoming better known for my citizen journalism and branching out into different things such as working as an executive producer for a mixtape recently. Studying Film and Media at University, just in case it turns out I'm not all I'm cracked up to be.
7 years ago in MileHI Imports
ChipmunkDouble SGrimeHip HopLee HawthornMarvellMileHiImportsShockaUKVertex