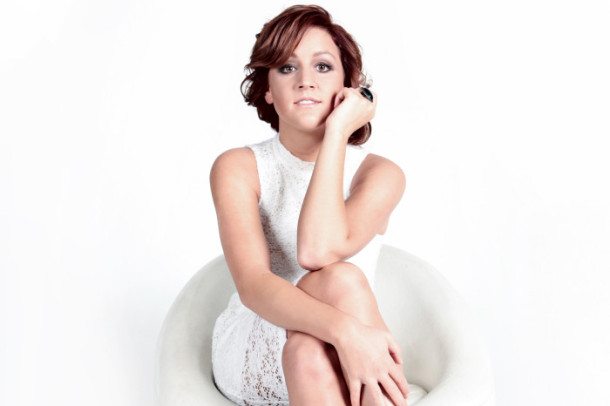 Every now and then you come across someone with such an amazing voice that you can’t help but to keep hitting the replay button. For us Katy Mcallister is definitely one of those artists. From the way she carries her notes to the passion in her voice, Katy is the epitome of raw talent. Under the guidance of Tyler Ward she has managed to gain a significant following as well as hone her vocal skills. Amid everything else her confidence seems to draw us in the most, and with that alone we are certain she will make fan out of everybody. It’s always a little more refreshing to get to know the human side of an artist you like, so we did just that.

How did you discover that you can sing?

Katy: Ever since I was little my three sisters and I made up dances and songs and put on shows for my parents all the time. My family has an annual Christmas party every year since before I was born and we used to put shows on for all of our family and friends. We still sing a couple songs each year. I also used to sing in front of my mirror and pretend I was performing on stage, I sang in choir for 10 years and eventually started writing songs on the piano around the age of 15.

In regards to music, who had the most influence on you growing up?

Katy: My Mom and Dad. My Mom started teaching me piano when I was 3 along with all my sisters. My Dad was the lead singer in a country band who played around Dallas before I was born and can play fiddle like nobody I’ve heard. He also plays guitar, mandolin, etc. They both introduced me to music and had me growing up listening to great musicians who’ve also influenced me.

Do you think you can handle being famous?

Katy: I’m not sure what that would feel like. I’m assuming it would be very overwhelming but pretty exciting to have all that attention.

What is your most embarrassing moment?

Katy: Embarrassing moments are a regular thing for me. I’m talking every other day, I embarrass myself, so it’s definitely hard to say which one tops them all. Probably the time I was playing spin the bottle and I had to kiss a guy friend that I had a crush on and was so nervous I accidentally bit him. He won’t let me forget it. I was a lot younger then…

Katy: There are many interpretations of the song, but “Wonderwall” by Oasis is definitely top 10 for me.

Have you ever had your heart broken? If so, how did you cope?

Katy: All of my music is reality. Things that have actually happened and things I have actually felt. I love to run. After my first big heartbreak at 16, I focused all my energy on running and working out. Every time my love life is on the rocks, my body becomes healthier than ever. It’s strange how that works. After that first heartbreak is also when I wrote my first real song. (Not counting all the amazing songs I wrote in elementary school, of course.) There are many things I don’t have the guts to say, so if say it on paper and sing about it it almost feels like I am saying it to someone.

What’s the last song or album you bought?

Katy: I recently bought the album “Sand & Snow” by A Silent Film and the album “Heartthrob (Deluxe Version)” by Tegan and Sara at the same time. I’m very pleased with both purchases.

What is your 5 year plan?

Katy: I don’t really make plans, I kind of live my life month to month. But I guess in 5 years I hope I am playing live music all around the world, will have released several albums, and will have collaborated/co-written with many different people.

In regards to your music career, who would you say has helped you progress the most?

Katy: Tyler Ward got my music to be heard by producing it and sharing it online, he gave me the courage to get over my stage fright by putting me up on a stage to open for him in Denver, he talked me through it even when I wanted to back out. He believed I had a future and real talent, even during rough times when I didn’t think I had it in myself. He’s always been a great friend, as well as producer and mentor.

How long does it normally take you to write a song?

Katy: Sometimes an idea comes to mind and I can get a song out in 10-15 minutes. Other times, I have to go back and revise it later. Sometimes it can be frustrating trying to finish one song because I always feel like I have more to say, and then I end up with a 6 minute song flooding with too many lyrics.

stranger, what would it be?

Katy: I would say with anything in life, even if it sounds cheesy, if you have a dream or a big idea in mind of what you want to do with your life, it’s not impossible even when people tell you you’re nuts. If you see it and believe something can happen, it CAN happen. But all this talk of the universe and luck are just excuses to be lazy. The ‘universe’ will only do so much, I believe you have to make things happen yourself. Don’t sit back and wait around for things to work themselves out. Also, don’t be afraid to be heard. I’ve embarrassed myself millions of times because I show my feelings and say what’s on my mind and I put music out on the internet for people to judge. If you are an aspiring musician, then put your music out there.  In any situation, if you don’t put yourself out there, you won’t be found.

Katy: There is a mini tour in the works hopefully for the end of Summer 2013.

Now that you got to know a little more about her, we’ll let Katy’s music vouch for itself. After you watch the video you can buy her latest project “Take Me Away” right HERE on BandCamp or right HERE on iTunes.You can also check out her profile right HERE. Enjoy, and don’t forget to let us know what you think by commenting below!

MileHImusic.com is Colorado's premier site for all things music. Our mission is to bring recognition to local artists, and also serve as a medium to connect Colorado to the hottest artists across the nation. To accomplish this we present one-on-one interviews, artist & song reviews, featured downloads, a concert calendar( AEG Live & Live Nation), music showcases, as well as concert ticket giveaways.
7 years ago in Below The Surface
coloradoKaty McAllisterMile Hi Musicmusic