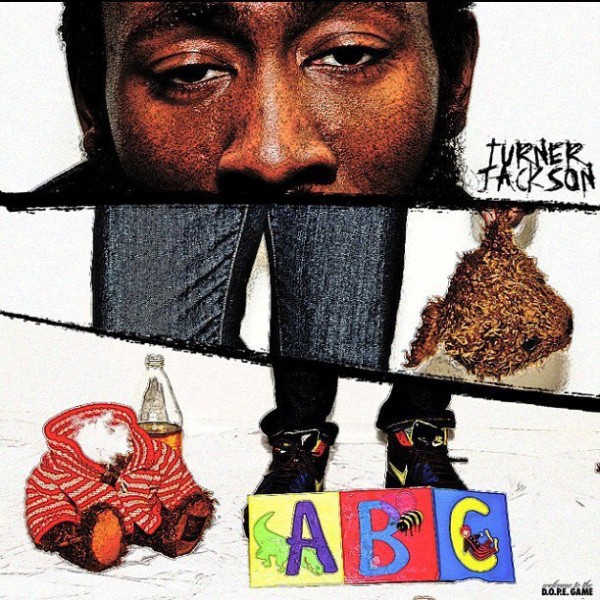 The way he talks about peace and love Turner Jackson might be a little bit hippie. Then again; rock and roll emerges in his flirtations with drinking and drugs. If you catch him mid flow you might strap on a backpack and label him a “conscious rapper”. When you really consider Turner Jackson’s music; there is no category into which it cleanly fits, and after conversing with Mr. Jackson the multidimensional nature of his music is no surprise. As a person and an artist he exemplifies the motto of his D.O.P.E Game team (Don’t Oppress Positive Energy) Turner Jackson speaks of life with a broad acceptance of everything it has to offer; taking things as they come and enjoying the experience. Follow him on Twitter @TurnerJackson and download his latest mixtape “ABC'” on welcometothedopegame.com

Demi Ford: How long have you been rapping?

What’s your affiliation with D.O.P.E Game?

Turner: I’ve been a member of the D.O.P.E Game since day 1. It was born out of my heart and Jeremy’s brain.

Turner: There’s nothing really up with the Malt Liquor Movement. My friends and I like to drink. We assume most people our age do as well. A lot of us have had DUI’s, gone to jail, died or got into some type of trouble due to our drinking. It’s also something that we have used to have fun, love and the best times ever. The people can identify with it because the movement is for them.

You’ve been compared to Andre 3000 before are you complimented by comparisons to other artists, or do you feel they minimize your individuality?

Turner: I have always been compared to someone for my entire rap career. Originally people said I sounded like Kanye and Lupe. Then I sounded like Wale. I get it a lot but it never bothers me. People say 3000 now because he is where the limits of a rapper end for most people. He uses his voice like an instrument. As things go on I hope that people say, “Man I haven’t heard anything like this before.” I haven’t even discovered half of my potential. I would like to create a new style one day.

What influenced your latest project ABC’s? Is there an overarching theme?

Turner: My personal albums always portray my life. The words are my story of women, couches, drugs, drinks, and doing what I want to do. It is also the story of how I’m over all of that. I’m ready to grow up and be a man. I was listening to a lot of music, most of which I cant remember right now. Kendrick, ASAP, SchoolBoy, Danny Brown, Don Trip; the list goes on. I listened to what was happening in Cali when I heard Kendrick and Q, New York w/ ASAP and FBZ, Danny in Detroit, and Don in the Ten. I just wanted to speak my heart; my city was on my heart; my son was on my heart; my friends; my God. So ABC is just my life constructed into something that will touch your spirit!

Do you have any rituals that get your creative juices flowing?

Turner: I don’t do anything to turn my music on or off. Its always on. I’m always ready to go. If put to the test I’ll do anything that you ask with words on the spot.

Describe the feeling you get when you finish a track you love.

Turner: I feel like an author that has written a good story. It flows so well that you’re sad it ended. So you read the book again look in the mirror and say “Man That Some Good Shit”. Then I get a little afraid because I hope that isn’t my last tight song. So I shoot to make the next one even better; that continues to sharpen the skills so that I can do it for as long as need be.

What do you think you contribute to music that other rappers don’t?

Turner: I bring A joy that is unmatched by any man because it’s not from any man. It never ends so I have enough to share with everyone. Therefore I can’t be beat. I’m on the Team of We not the Team of Me. I enjoy challenges. I always aim to win through fair dealings and kindness. I don’t mess with people that try to get over or don’t work hard for what they want. I bring everything that I am to the game.

Would you ever refuse to work with an artist? Perhaps because you don’t identify with or respect their work?

Turner: There is more to music than just a message. I understand that though I try to make my music have a message. I’d work with anyone once. Twice depends on our relationship after one.

How would you categorize your music?

Turner: If I had to brand it I make “Neo Nu Skool Soul Tunes” The most important thing to me is that people see what’s inside my heart when they hear my music. My music is a reflection of my heart in it’s purest form; it never matters what people call me. I’m all about showing you what I can do so that you can call me something new.

What do you envision for 2013 and the future?

Turner: Well For 2013 I personally have about 2 more projects that I will be putting out. I’ll also be on a lot of features. I believe that there is a Tour in order but I can’t really say more than that because this aren’t official yet. But 2013 looks very good. Lets hope it continues to be awesome! I would love to be touring the world in the next 2 years for the next 50 years! Just living life and writing about it. As long as I keep my faith and know what I’m supposed to do there is no reason that it will not happen. I also realize that things don’t happen in my time so I’m not too worried about 5 years from now either. I’m just happy to be here right now.

Tell us your wildest dream.

Turner: I really don’t have any wild dreams anymore. I wanted to rap. I’m doing that. I wanted to be a good dad. I’m working on that. I’m working on being a good man for whatever girl I’m gonna be with; which is an everyday process. She ain’t here yet so no worries ya know. I just want to travel the world with my friends and do cool stuff; show my kid how to do cool stuff and serve the people.

A love for music was cultivated in me from conception. That love has harvested an obsession, an addiction that I just can't quit. From the moment I could hold a pen, I can remember writing songs with my dad; composing melodies with him and brainstorming ideas. I would wake up late at night, and he'd be in the living room writing, singing, and altering his clothes to fit his individuality. Like most children, I remember wanting to be like him, and wanting to create something that would make him proud. Creation was our connection, especially through music. Since then, music and its cousin poetry have been my means of connecting with the world and conveying my beliefs. Music has and always will be my motivator, my comforter, my hype-man, my confidant, my psychologist, my professor, the one that truly understands me. I'm not selfish though, I want to share music with the world. I understand that music can embody everything, for everybody. Music is one of the universal constants that crosses all boundaries. So let's get connected.
8 years ago in Below The Surface
ABC'sdenverDenver RapperDOPE Gamerapperturner jacksonWelcome To The Dope Game