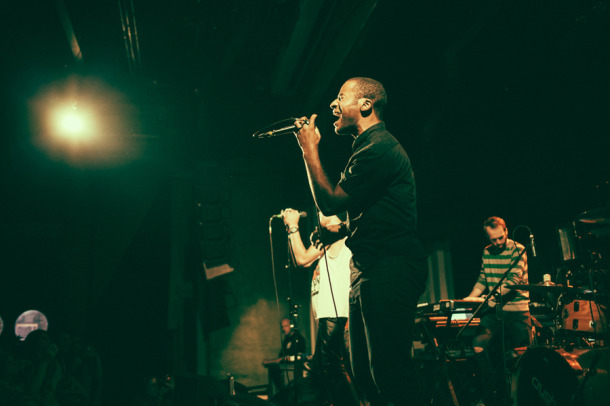 Popular local Denver band Air Dubai is moving up in the world with the start of more tours, music, and a signing with Hopeless Records. The band consists of Julian Thomas, Jon Shockness, Lawrence Grivich, Nick Spreigl, Micheal Ray, and Tailor Tait. Guitarist Lawrence Grivich and singer John Shockness go in depth with news about their newfound success and life on the road:

So you guys just finished up the Journeys Noise Tour, are starting another tour with Bad Rabbits, and are doing Vans Warped Tour in the UK! Not to mention you guys just signed with Hopeless Records and released some new music. How does all this success feel for each of you?

Jon Shockness (JS): For me it feels like we’re just getting started. We’re planning a lot of cool things and it’s nice to finally feel like we’re setting up a platform to create from

As I mentioned earlier, you guys are touring a lot. How do you all like life on the road, and what have been your favorite cities/crowds/venues?

JS: Life on the road is fun. I think we’re able to learn a lot about ourselves as a band which is great and also meet some amazing new people. The flightcrew is growing…

What is one thing each of you can’t live without while on tour?

Have there been any crazy incidents while on the Journeys Noise Tour?

JS – About an hour out from our show in Buffalo, NY our van stopped on the side of the road. We called the tow truck guy and let him know our soundcheck was in like 30 minutes, so he let us ride inside the van on top of the tow truck to the venue where we hopped out with 10 minutes ’till doors. He basically saved the show for us.

During your tour, you guys stopped in Canada! What was that like for you all? Was it anyone’s first time out of the country?

JS: Canada was awesome! We got to see Toronto for a little bit and eat some good food while we were there.

What is one thing each of you hope to be remembered for?

JS: When this is all said and done I hope people will know that we did this because we love music. “Pop” has such negative connotations nowadays, but we aim to make something that is relatable to people everywhere. Our band is so diverse in itself and we want to carry that out to our fans. Everyone is welcome, we all can have a good time.

How exactly did you all meet and how did Air Dubai form? What is the meaning/reasoning behind naming your group Air Dubai?

Lawrence Grivich (LG): Air Dubai was actually an old navy vessel that sunk to the very bottom of the Mariana’s Trench. To this day it stands as our testament to have courage but never get lost in ourselves.

What is one thing each of you miss while you’re away on tour?

What is one venue you all hope to play one day?

JS: 02 Theater in London would be dope.

I see lots of descriptions of your sound and musical influences on the Internet. What would you guys say your sound is, and could you list some influences?

LG: It’s a combination of all our individual guilty pleasures (Biebs, R. Kelly) as well as artists we all can get behind (Justin Timberlake, Phoenix, Kendrick, Miguel, etc.)

Do any of you have nicknames or stage names? If so, what and why? If not, what name would you give yourself, and why?

LG: We have tons of nicknames within the band, whats the fun in calling someone the same thing every day for as many days as we are in each other’s company? We call Taylor something different all the time, like Towel or Taste. We actually don’t find the need to develop stage personas, though.

Is there another Denver group that you all look up to or respect a lot? Or a Denver band you all are friends with?

JS: My Body Sings Electric, The Epilogues, In The Whale. All great guys.

How did each of you get into music?

LG – Originally as a creative release. Secondly to have something to fight about.

Air Dubai is on tour, so head to their website for dates and more information on the band:

I'm a 19 year old singer and songwriter for a sh*tty garage band, frequent concert attender, and recent Denver local. My love for local artists is comparable to my love of cake- and I really, really f*cking love cake. Major fan of any genre, and especially anything with a banjo or a funky bass.
7 years ago in Below The Surface